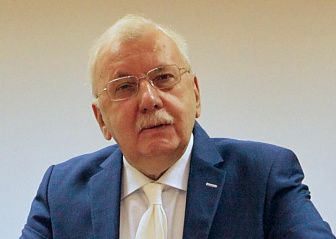 Open Russia and the World for yourself! Come to Higher School of Television of the Moscow State University!

Founded 12 years ago, our faculty is named the High School of Television of the Moscow State University. It is the first and still the only faculty in Russia, which prepares creative workmen of television by its original programs.  The slogan of our faculty is “We will make television better!” And this is not accidently: we perceive the grate power of television as well as its numerous disadvantages, that cause the constant critical comments of the common TV viewers, politicians, social workers, professional TV critics. Never the less, everybody admits that the Russian television creatively and organizationally – technologically, stands on the highest professional level!

But it doesn’t mean that it can’t be improved. And this is the mission of our graduates. They are 800 people already, and they work in all. Leading TV channels of our country and in all leading producing TV companies. Thought, they are not in managerial positions yet because our faculty is too young. But we believe the time will come when just the graduates of HST MSU occupy the key positions among the top managers of the largest TV channels of our country and the showmen of the most popular and influential (TV shows) telecasts. The teachers and the staff of our faculty do much for it to happen.

How and what do we teach our students?

Besides, the students learn everything that belongs to the theory and history of the World and Russian cinema and television, and also acting, especially necessary for those who want to become TV presenters.

A creative worker of television must possess all this knowledge and appropriate skills, that’s why, our faculty isn’t divided on the departments of different TV specialties. We teach everything to out students, that will anyway allow them to make a successful career on a televise on.

Finally, we teach our students to work on any kinds of modern TV equipment. There are training photo and telestudios, an editing studio with the set of all appropriate equipment in out High School. Besides, we have our own MTVS – a mobile TV station, mounted in a special minibus. The students only begin to master the methods of TV work on the faculty. Further they will have practice in the largest TV holdings of Russia and in leading producing TV companies in each year of study.

Besides, there are a great amount of optional and selection courses: directing of TV feature films (TV serials), documentary films, animation, etc.

Nowedays, practically all young people «live in Net». The imagination that the Net kills television is quite superficial. Television image is left so in the Net too. Never the less the methodology of  the Net telebrodcasting is established in  our programs of studying. And from the next year we are entering the special programme of  studying for personal video blogging.

The Moscow State University is a town in the city, by the way in of  the most beautiful and the greatest for intellectual and cultural riches cities of the world in Moscow. Even not leaving the territory of  MSU, the students of our faculty can shoot their works in the leading scientific laboratories in the centre of supercomputers, in the astronomy observatory, medical clinics, in the zoological, archaeological, geological and other museums of the university, in the biggest in Russia Botanical Garden. Not to speak about numerous sports grounds and simply on the huge territory of the university in Lenin Hills with its forests and gardens.

Without a doubt, it is possible to shoot a video plot, a documentary or even a feature film on any theme on the territory of MSU. And a foreign student enrolled to our university will receive at once all these riches at his disposal.

You should only enter our university and study hard, and you will learn how to make the television of your native country better. A few dozens of young people from foreign countries have already used this opportunity. Now we are waiting for you!